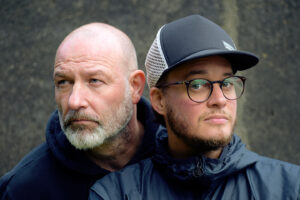 “We’ve been soulmates for years, but the fun really started once we decided to make music together!”
PRXX (pronounced Pricks) is a Dutch duo existing of Eddy Zoëy and Cyriel Marijnissen. Eddy delivers some rock, Cyriel pumps up the beats: “Eddy once played me some demos, telling me he needed a producer. The catchyness of his songs spoke to me,  I asked him if I could try it myself. Immediately I could feel some kind of Audio Bullys vibe, that UK house sound. Eddy himself was more thinking of Madness though, but anyway: British!”

Stay impulsive and dare to follow your gut feelings. That is what PRXX is about. Eddy sings, writes, plays the guitars and even the trumpet. Cyriel gives those recordings his personal housey treatment. With an overdose of excitement and a fuck-it-mentality, the tracks came together during the Dutch lockdown in spring 2020. Eddy is mainly influenced by ska artists like Madness, The Selecter and The Specials. These names hardly mean anything to Cyriel, because his inspiration  comes from DJ’s like MK, Todd Terry and Basement Jaxx. Eddy’s raw vocals color every track and showcase him as a standout vocalist. Anyone knowing him in person, knows that the music just hás to sound this way.

Eddy: “We’re working straight from passion. We’re both leading busy lives. Work, family, everything takes time, but we both also need a way to express ourselves. We needed something that doesn’t take energy, but gives energy. That is PRXX.”

How do you release a single in 2020/2021? Follow @prxxmusic on Instagram. You can see their creative process develop right in front of your eyes, by the videomessages the men send eachother and share with ‘the gram’. From creating a demo, designing the logo and single-artwork, to the photoshoot, it’s all out there in the open. Tune in!

LISTEN TO THE LATEST HIT SINGLES

THE WORLD OF EDDY ZOËY